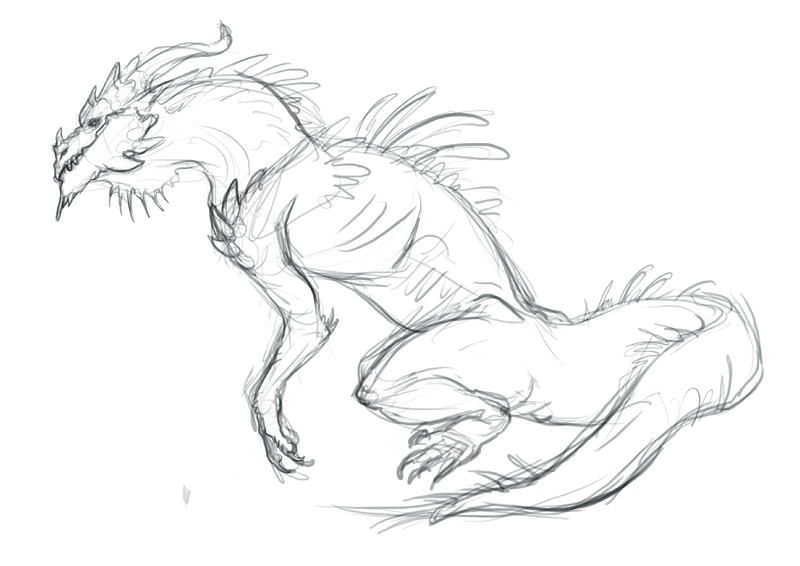 A creature I sketched as a warm up before working on something for a client the other day.

Anatomy studies. I don't do enough of them. 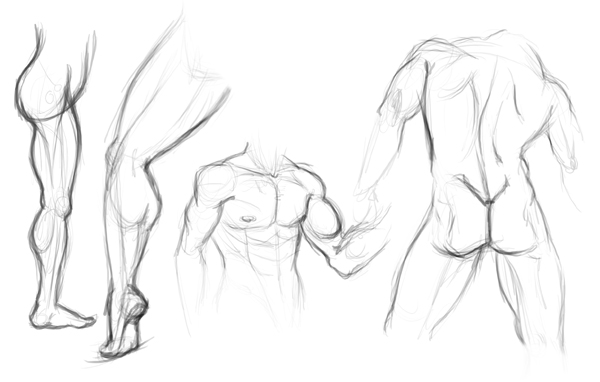 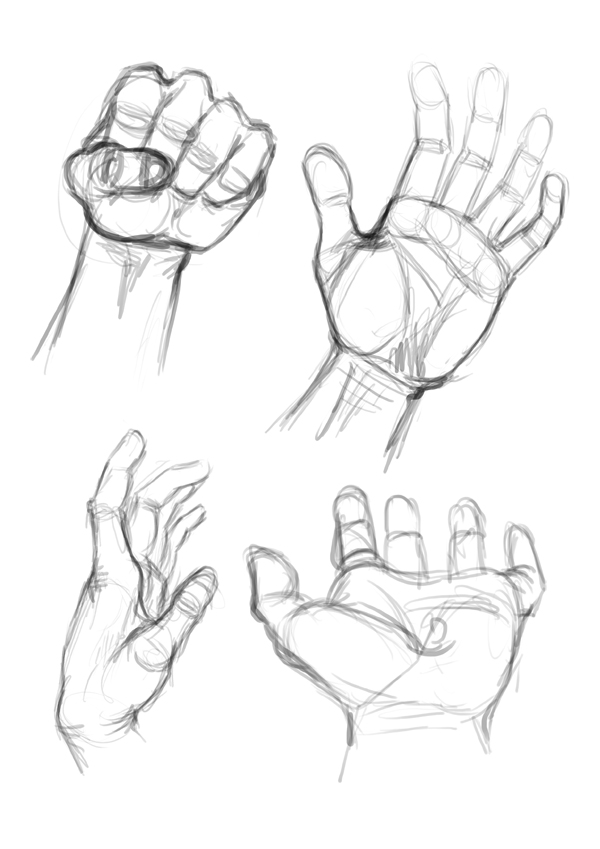 Sonic Boom stylie Arrow again. Kinda like how this sketch turned out. :) 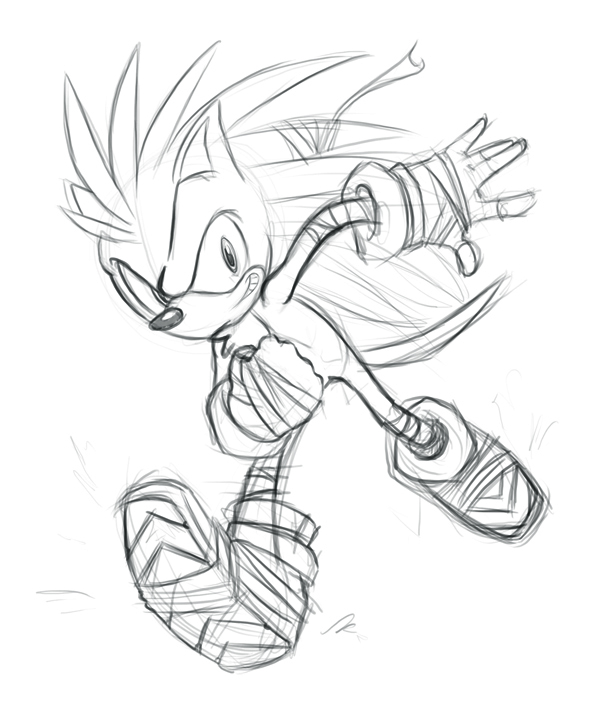 Squad scribble from the other day.

Slow this month, sorry. :( Here's another of disney's Gargoyles, Brooklyn. 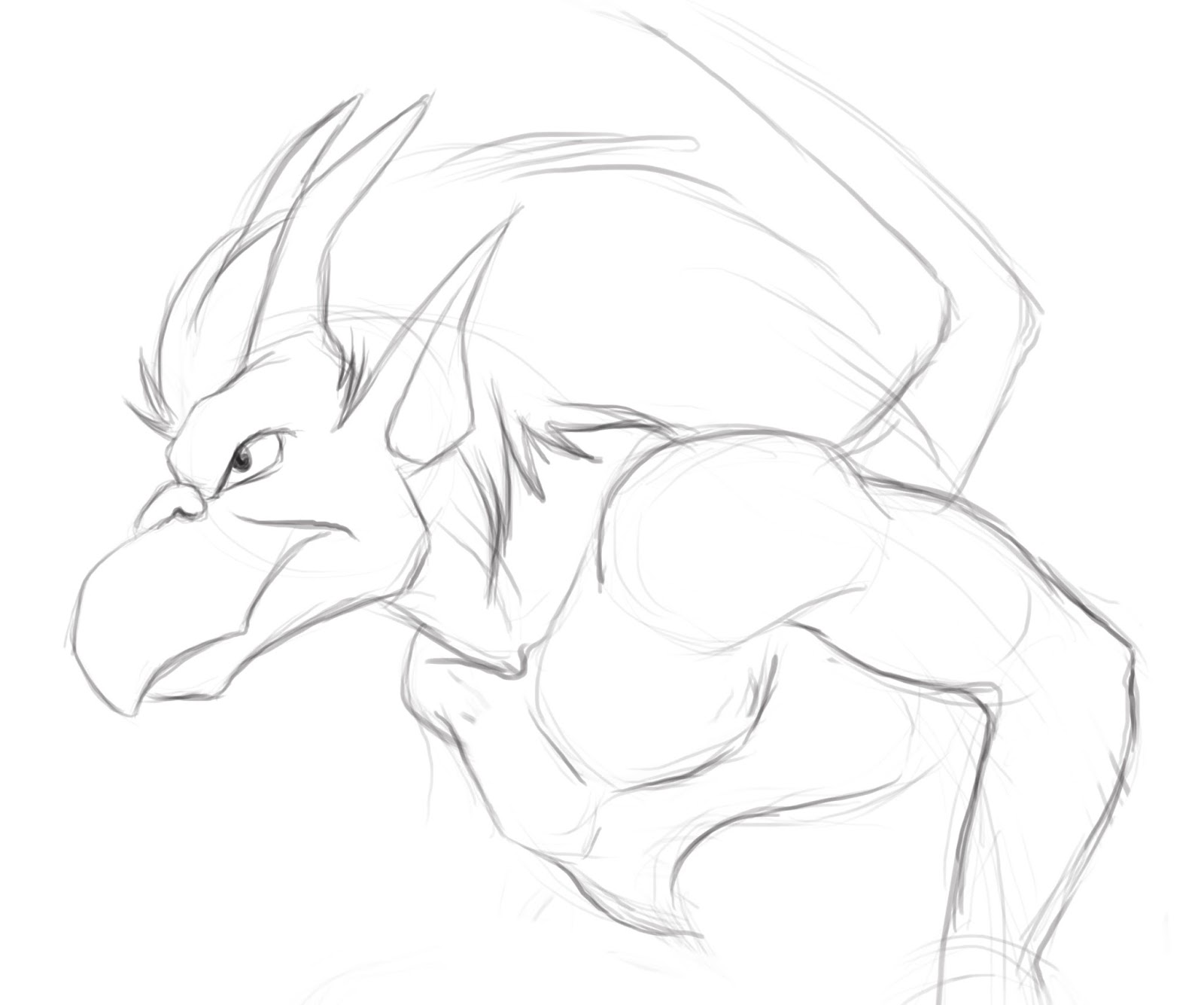 Remember that Disney show Gargoyles? It was amazing. 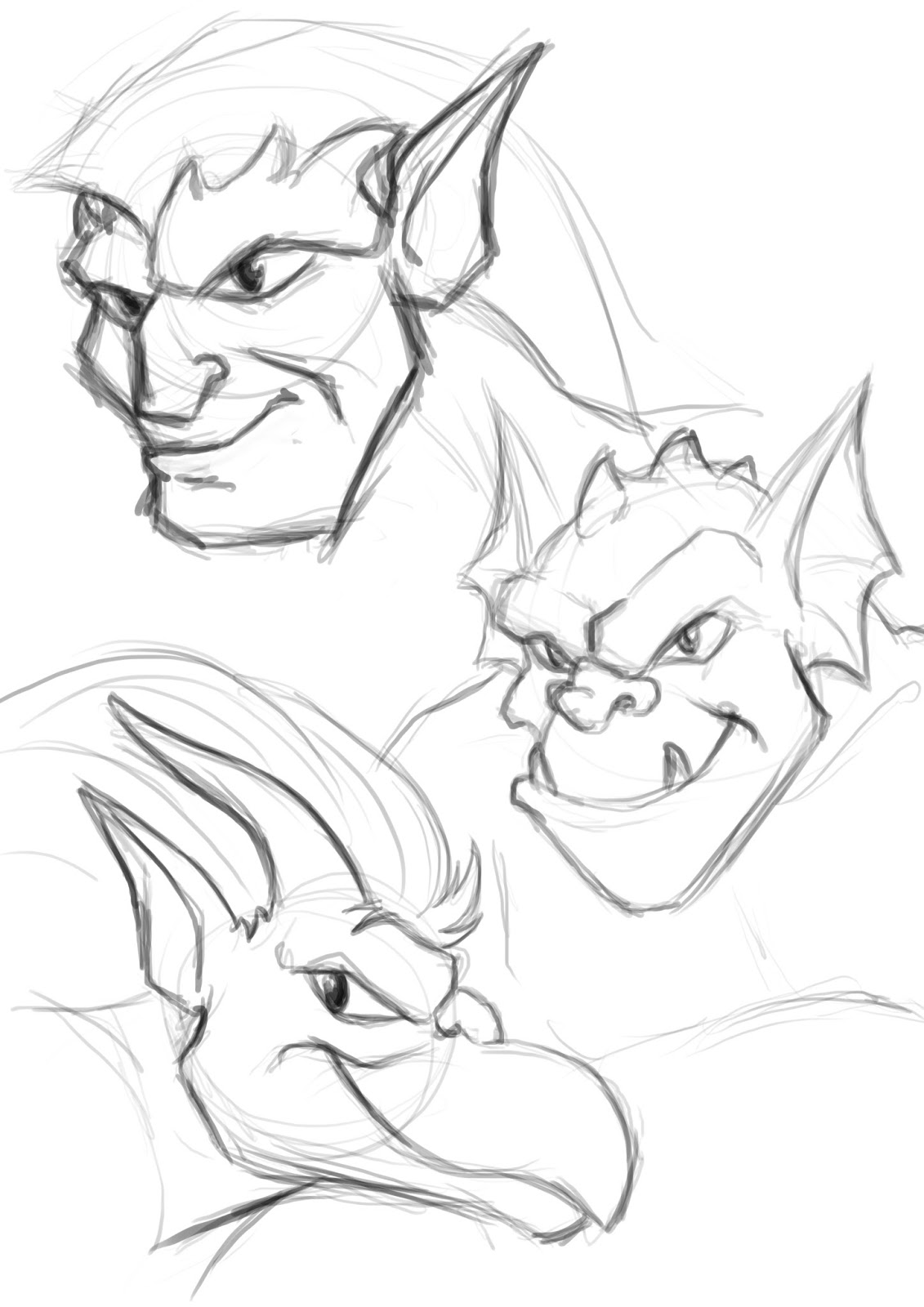 Here's some more Arrow sketches inspired by Sonic Boom. Trying to get back into the swing of drawing him.

I think today is his birthday. Happy 10th, Arrow! 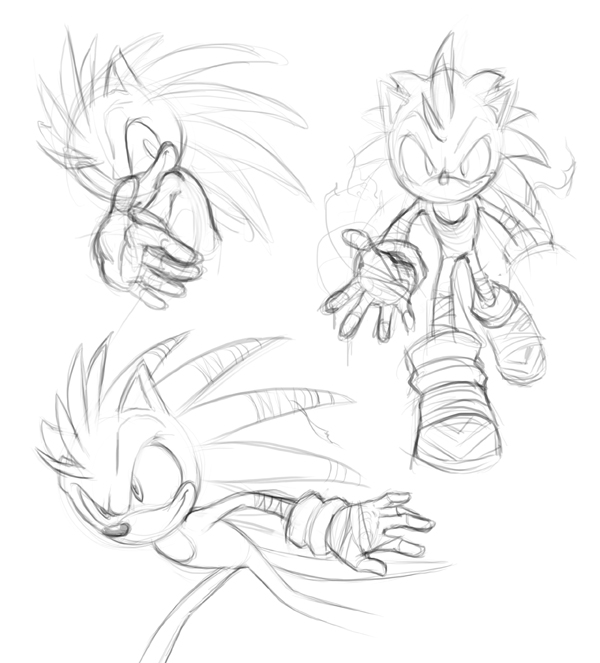 So, Sonic Boom was properly announced the other day.

I'd heard rumours about the designs from those in the industry and was scared, but actually I rather like the outcomes...

So of course, I had to try and work the Sonic boom conventions into a design for Arrow. Here's a quick concept. 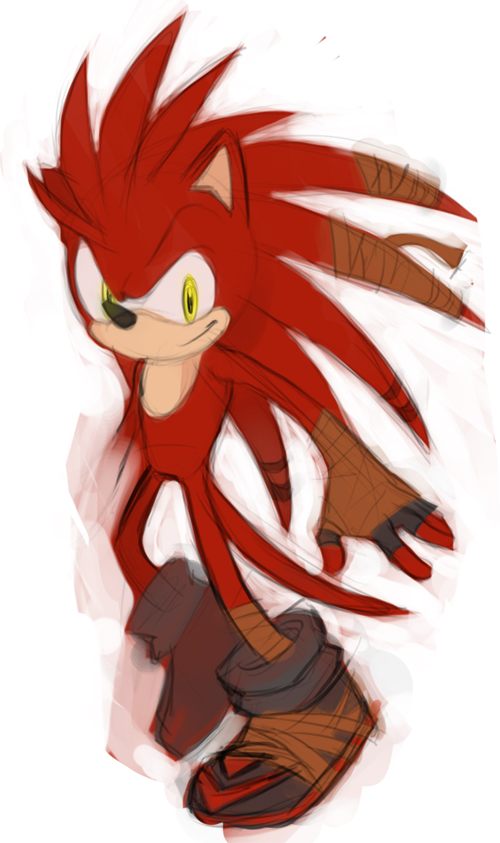 I actually think this quill style is the way forward for his design in general.
at 13:10 No comments:

I read everywhere about artists struggling with not being able to draw what they can so clearly see in their minds eye.

...Where as I feel rather alone in my struggle with not being able to visualise clearly in my head, in the first place.

I'm just... Not very creative, creatively speaking, anyway. I'm extremely creative with my ideas about the world outside of art. Weird, huh?

Drawing for me was always a natural motor thing. An enjoyment from doing, not from the end result. And it wasn't until external sources started to notice I could draw as a kid that I even realised the end result was important. I've never had a passion for finishing things. My drawings were usually in pen on recycled printer paper, they often still are. It's impossible to finish a doodle, because the very nature of a thoughtless scribble is that it lacks intention and all the information that makes a picture work - fundamentally, composition. For literally two decades, I've been whimsically scribbling in my spare time and occasionally working into sketches that just happened to, by coincidence, be at least partially fit for developing.

So when it came to school, and now work, I didn't know how to plan images with intent. It was, and still can sometimes be, terrifying. I never naturally think "I'd like to draw ... and I want it to look like this." I just kinda draw and see what happens.

I don't know whether my lack of mental visulisation or imaginative skills are part of the way my brain works, or are from never exercising the ability, or are some kind of habit learned from years of meaningless scrawling. How do you learn to be creative? Is it even possible?

I don't want to loose my ability to draw without thinking, it has benefits, but I do want to better my ability to plan and imagine something, then put pen to paper with the intention of making it look how I imagined. I don't know exactly how to do that, but I think thumbnail sketching is probably a good starting point. Because even if it turns out that my brain simply cannot visulise very well, I can use very quick scribbles to amend and expand upon a concept until it is appealing, like building blocks. It enables me to see something to expand upon, since I find imagining it out of nowhere difficult, maybe even impossible. And all the while I say this, I wonder if I'm simply not realising that I must have a mental picture in my head to be able to draw at all? Though there's evidence that drawing with some level of precision, skill or whatever you want to call it can be entirely motor memory. I remember watching a documentary about a man who couldn't make new memories who over days, weeks and months learnt to draw a shape with more precision. I'm hoping this isn't what I'm limited to, but terrified that it is.

Below are some thumbnails for a Congo themed family coaster concept I had last year, but I thought I should really get it out onto paper. I want to make a conscious effort to think about practical or creative problems with designs as well, early on, putting that thought and planning into image making. I've been reading a lot of James Gurney's stuff recently, and it's inspiring advice. Check him out. 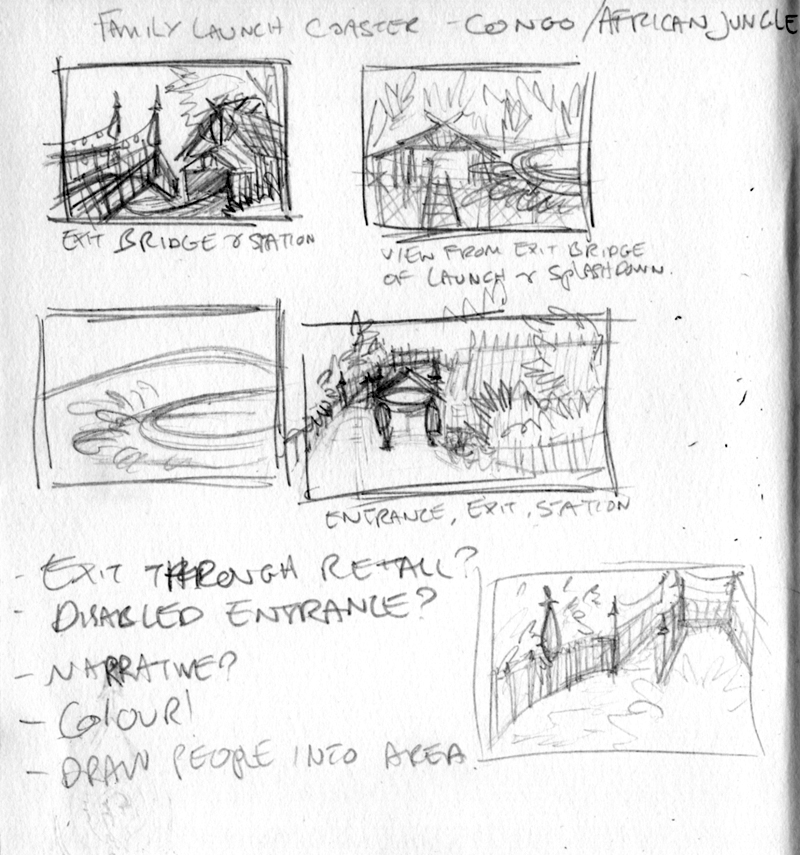 It's literally 23:30 and I promised myself I'd post today.

Here are a couple of buildings from photo reference... Better something than nothing.

I've been slipping... January was such a good month and now I'm in a "don't want to draw anything I don't have to" mood. :(

Here's an environment from photo observation. It's from a few days ago. 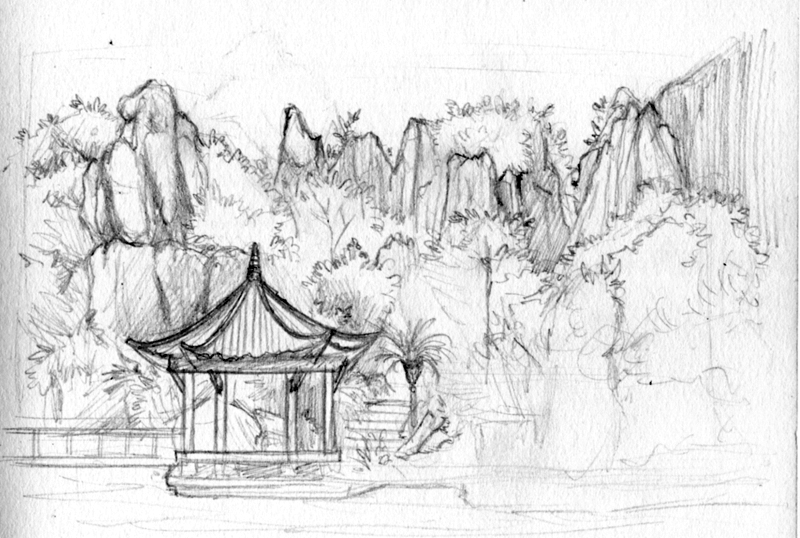 More for the unofficial Dragon Falls retheme I'm working on. 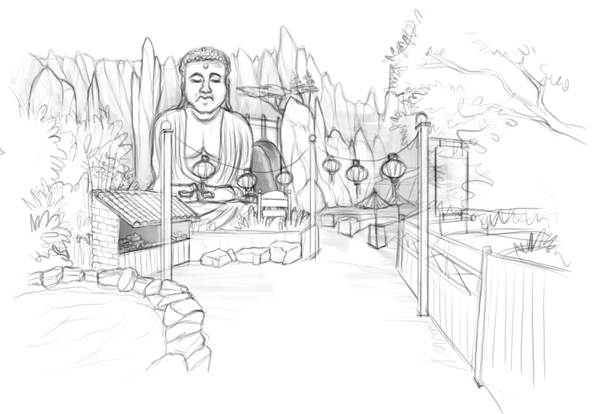 This is what the location currently looks like, from Google Street View. 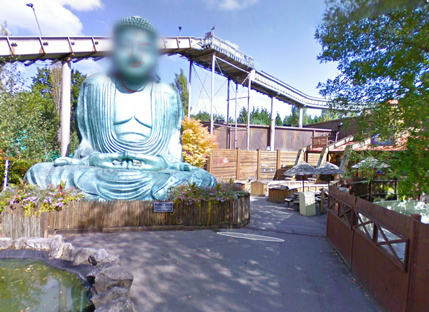