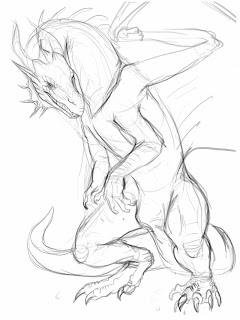 Like this one's face... Doesn't fit it's body though, in typical me style. 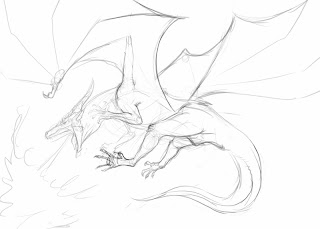 Might actually become a painting. Wings are confusing. I drew some scribbles on it to try and work out where the highlights were and what colours would be cool. I also think I'd be wise to do a background whilst working on the creature, instead of leaving it till last then getting bored with it. 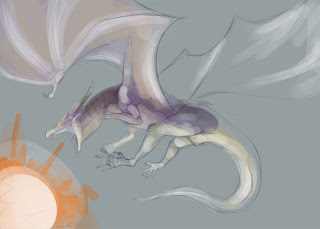 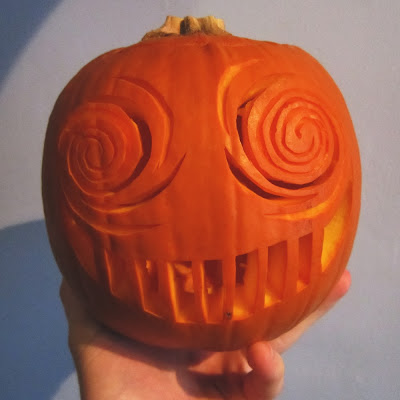 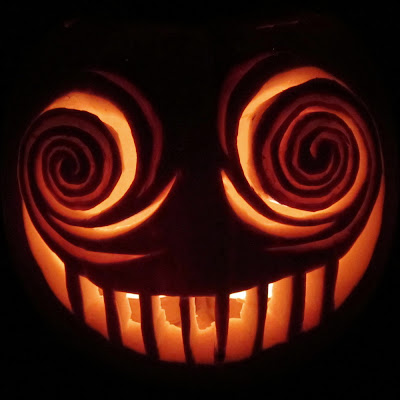 The swirls were a nightmare in themselves to carve...

The Smiler is roller coaster at Alton Towers. This is the ride's logo. :)
at 16:59 No comments:

Email ThisBlogThis!Share to TwitterShare to FacebookShare to Pinterest
Labels: halloween, pumpkin, the smiler 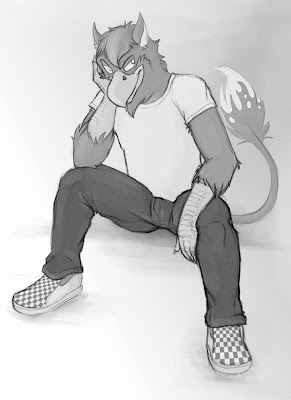 Those legs were a nightmare. Like the one I posted a couple of days ago, I wanted to push myself a bit with a pose. This is still awkward all over the place, but its pretty good for me.
at 20:55 No comments:

Added colour to this sketch from a while ago, that I apparently never posted here... 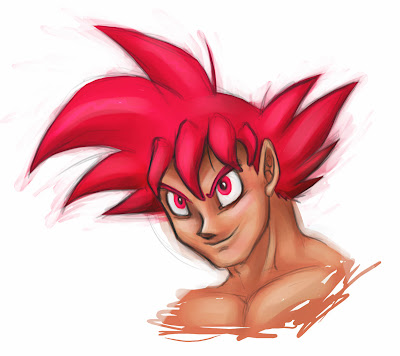 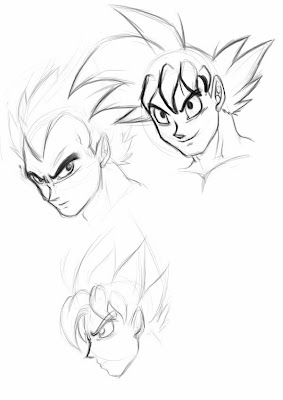 Kinda thought he looked too lean, but since Super Saiyan God is lean, I figured I'd chuck appropriate colours on it!

His skin is too dark and pink. But when it was lighter it looked wrong. IDOWHATIWANT.

In other news related news, my Majin Vegeta picture is now available as a print on Etsy!  I've also set up a new Twitter account for artists and illustrators who sell their work on Etsy. The aim is to gain greater exposure by mutual promotion, so check it out! https://twitter.com/etsyillustrator

My Macbook is back at the Apple store being repaired, again. It's been worse since they last took it in. I'm also super busy as of late with work. I cannot believe it's almost Halloween... Where have the last couple of months gone?
at 17:51 No comments:

I have this weird habit of drawing human-bodied characters too elongated. So I tried to force myself not to with this.

Also decided I was going to draw a difficult pose, that of course didn't go so swimmingly.

What makes this pose difficult? I think it's because it's a real, normal pose so it's more obvious when it's wrong? Also, crossed arms, who even knows how they work. Everyone crosses their arms slightly different too. #Excuses. And then there's the foreshortening issue with the leg that I failed at miserably.

His eyes are also a bit squiffy.

I've been diagnosed with Dyslexia 3 times in my life. Once when I was very young, once as a teen and then again at University in order to receive various support.

Most people are surprised to learn of my Dyslexia. Dyslexia Awareness challenges the misunderstanding of what Dyslexia actually is and how it effects different people. It's a SpLD (Specific Learning Disability), so a relative of Dyspraxia, ADHD and Autistic Spectrum Disorder. The diagnosis is essentially an IQ test that shows up symptoms of all SpLDs, and sufferers have overlapping symptoms. Dyslexia in particular is characterised predominately by difficulty reading and writing, this everyone knows. But the key point is that it's a difficulty despite normal intelligence. It's about a discrepancy. So, for example, my reading and writing skills are actually within the national average (they were below as a child), but I have higher function in other areas. Through support, technology and passion, I've "overcome" Dyslexia, for the most part.

What I've always wondered is this... Where does my variation as a human mind end and Dyslexia begin? I don't know if I just have a higher awareness of my brain's inability to do certain things because I have a label, or if most people simply are pretty average at everything.

Right now, I'm battling with the glare of my monitor screen, which is scoptic sensitivity, a SpLD symptom, along with audio stress, causing irritation and extreme distraction by sounds. I also find it hard to juggle information in my head or digest information quickly enough, as if I've not enough RAM installed. My reading speed is slow and unless I am particularly interested in the content, it will not sink in no matter how many times I go through it. I tend to skim read, assume what things say and miss important details because of this, my eyes jumping back and forth along a line to try and get the general gist of a sentence. Beyond counting of amounts, maths is terrifying and feels like completely pointless stress that everyone else deems as essential to life as breathing. I subtract by adding from the smaller amount, that seems logical to me. I find it difficult to remember even essential stuff and doubt myself, double checking that I've got something like a train timetable correct multiple times. I can't retain a phone number long enough to write it down, and my brain often reads digits wrong as if it panicked and just made something up to hide that fact.

Do "normal people" really not experience any phenomena similar to this?

Despite my, what I'd call "poor" short term memory skills, I actually score only a low average. So, it gets a tonne worse than I experience. But it's about discrepancy, remember. My "perceptual organisation" skills are in the top 1% of the population. In other words, I'm really, really good at that red and white block test. A symptom usually associated with Autism. I'm so good at it, in fact, that the tester had never seen anyone do it so fast before.

Though in my head, I can't fathom how anyone would find this difficult. And this is the problem with Dyslexia Awareness. It's not a lacking awareness of Dyslexia that is the problem here, it's failure to see that we are all different, and we could all do with being a little more understanding and supportive of that fact.

I've edited this post several times to fix errors. But I'm sure there are more. Errors that I don't see for ages.
at 22:10 No comments: 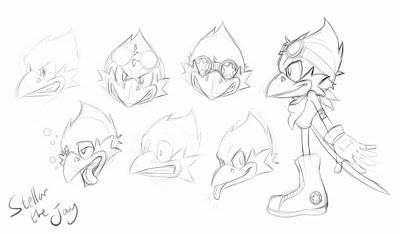 Surprisingly consistent, for me.
at 20:18 No comments:

I really need to do some observational drawings of real people.
at 00:10 No comments:

Can't believe I had the motivation to finish this so quickly! 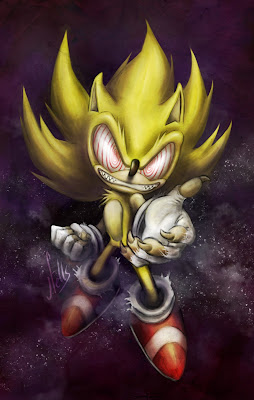 Super Sonic from the British Sonic the Comic was a psychotic, sadistic and dangerous creature. And is thus cooler than SEGA's portrayal. And so much more fun to draw.

Yellow is a difficult colour to shade. I feel like I cheated by using purple so heavily in this. It's like a school project.
at 22:21 No comments:

Email ThisBlogThis!Share to TwitterShare to FacebookShare to Pinterest
Labels: digital painting, finished work, Sonic the Hedgehog, STC, Super Sonic
Here's a sketch of Fleetway Super Sonic from the British Sonic the Comic that I am currently working on colours for. :) 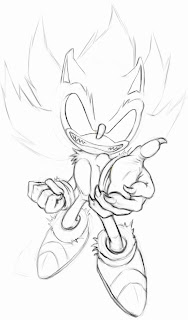 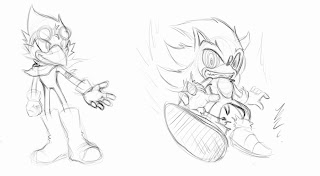 Stellar and Fleetway's version of Super Sonic. The version I grew up with in the British Sonic the Comic. He's insane, and thus awesome. I really fancy trying out an epic picture of him. But first I need practice drawing him.

Most interesting thing to note about these sketches is that they are facing right. I never draw anything facing right. Seriously, scroll through my blog. No idea why, just doesn't feel natural. 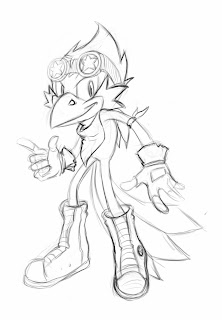 Sort of working with my buddy on a redesign of him.

Tired tonight. Had a very good day at work doing stuff I enjoy with people I like, but for some reason now I'm exhausted. The weather's finally taken a nosedive too, it was cold today.
at 20:47 No comments: 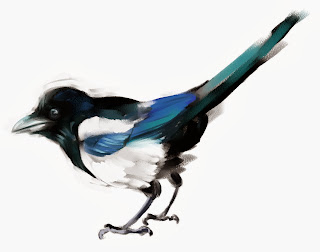 Digital painting in coral painter x, which I've not used in about 3 years. I was never good with it before and I'm probably worse now.

The thumb looks okay though so just don't click on it?

I'm in a crappy mood. The Macbook is once again buggered. Pretty sure it's Apple's fault. Pretty sure it'll get rectified for free. But it's just the burden of having to go sort it out. Any day off from work I get recently is spent sorting out BS.
at 14:55 No comments:

Here's an unusual t-shirt commission. These flower-like creatures are supposed to be fossilised crinoids, or "feather stars". They are kinda like a brittle star/starfish on a stick. :) 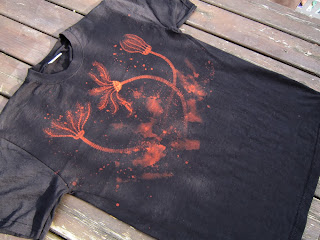 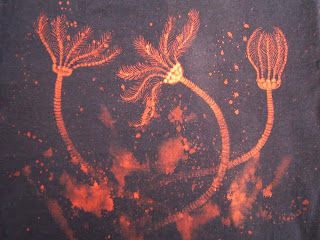 As always this is bleach solution painting on black fabric. I've made a gallery of my bleach painted tees in my official portfolio now, so you can view them all in one place! http://cargocollective.com/josephfells/T-Shirts Get in touch if you're interested in commissions.
at 16:13 No comments: 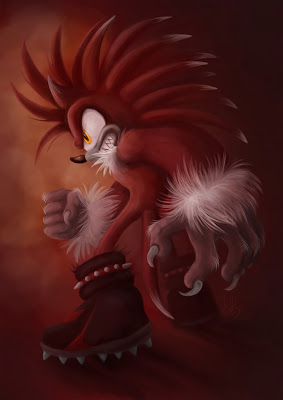 Arrow as a Werepine, inspired by the Sonic the Werehog game. Think he works pretty well as a beast, haha. Fun, and not as scary as I thought, to work with no lines. I tried to keep it a little messy and loose, but in areas it's kinda too overworked where I struggled a bit with it. Probably could be cropped a little at the bottom but I like that shadow.
at 13:30 No comments:

A rather serious and shocked looking Goku getting ready to Kamehameha! 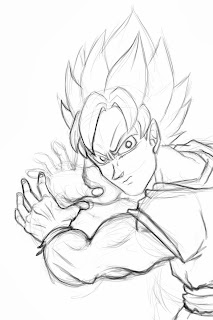 This is all kinds of wrong but I still kinda like it. That arm and hand is just dreadful. It looked fine when it was scribbly... Ops.
at 20:38 No comments:

And it being Halloween month means Sonic the Werehog inspired art must occur. 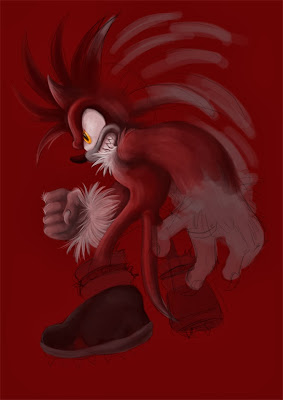 So here's Arrow as a Werepine. Playing about with no line digital painting. Don't really know what I'm going with this yet.
at 13:02 No comments: 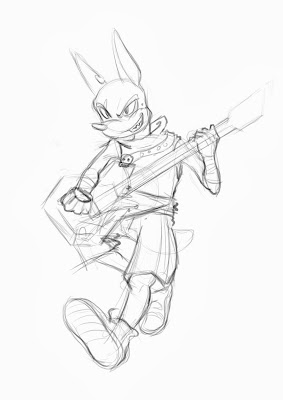