Some British garden birds. Great Tit, Goldcrest and Chaffinch. My intention was to use them on greeting cards. We'll see. 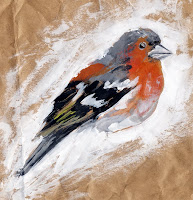 More X-Mas decs for prezzies. One is cinnamon scented the other smells of cloves. I can't tell you how much I hate cinnamon.

This is a picture from last year that was a jectected image for a uni project. I cropped and framed it and it looks quite nice. Considering going through old art and presenting it like this and putting it up on Folksy/Etsy. 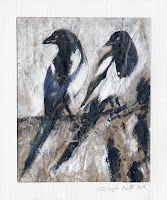 Some little sculpey robin Christmas tree decorations. Going to give them as presents. Need to find a nice ribbon to finish them off, me thinks.

So today, I thought I'd have a go at doing a "final" image. I can't tell if I've just been looking at it for too long, or if it's horrendous.

Issues I have with it... (This is for Dave)
-The text isn't working. I think the letters need to be bolder. I tried caps first and it wasn't any better. This looks childish though, and I wanted it to look like notepad scrawling, not childish. The text placement is awful. It might be because there is now less space in that corner, which I had to do to avoid the page crease.
- I think the wisp under his right arm needs to be above.. and the whisp behind the left arm needs to be under. Currently it feels like the remans of the wolf are in front of him, not all around him, so it maybe needs two layers of smokey wolf-remains.
- I think if the hero's right arm was stretched out to the right a little further, it would make the composition much easier to work with as the whole image could be shifted to the left, allowing room for the text but keeping that hand out of the page crease.
My brain is about to explode. Tomorrow Dave can knock out some more people like the one here whilst I'll work on the mini project. Then I'll make some more "final" images like this, only with any luck they will be more final and less problem revealing.
EDIT: Also, decided I won't be uploading much more of this project now that it's in final stages as, with any luck, the book will be for sale at some point after Christmas. :)
at 20:40 1 comment:

Email ThisBlogThis!Share to TwitterShare to FacebookShare to Pinterest
Labels: collaboration, Problem (Book), uni project
The other day we had a one day project at uni to make a zine. Had no idea what to do, but I thought it would be cool to have a book that changed direction. Images are based on the other project. 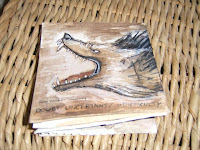 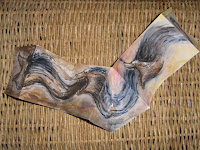 I'm going to make a zine about London as a mini-project I think. Just an excuse to make the kind of images I enjoy making, really. Going to start working on it tomorrow.
at 20:18 No comments:

Just wanted to get some mocks done tonight. Struggled with these, mostly because I don't think Dave's now very old layout is working anymore, so I improvised with this one, I think it's alright but not sure it reads properly. The tunnel is very simple, but it's quite nice, though I think really it would need to be more defined.

I'm not sure this one needs two images on the left page. Maybe just the hand, but as part of a cut more similar to the second image. Cuz the second and third image is very similar?

I was getting hung up on having the postive and negative dictionary definitions of "problem" on the cover and it influencing the cover design today, when it occured to me that it could be on inlay pages.

All people are drawn by David Lawrence.
at 22:10 No comments:

I've had some real trouble with this page. Required some observational drawing first. I think it looks nice, concerned about how well it reads though. But with text telling you that it gre and grew, it should be fine.

I think this composition is better, with the wolf way in the background, for communicative purposes. Will make the "grew and grew" page after this one a bit more epic.

This one is much nicer...

Some experiments... All the people were done by David Lawrence as part of our collaborative book project.

The darkness needed to be coming from the right side of the page, and we need to be careful of the page fold from the double page spread, so this following one seems a bit better, but the would still be problematic here.

And an experiment for the following page, but Ihateit and I'm already working on a new better one.

Cover and title idea for the collaborative book project... 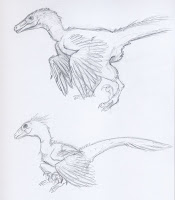 I havn't been drawing in my free time enough recently. Have a big sketchdump to compensate. 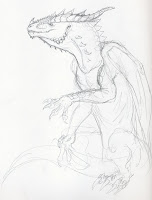 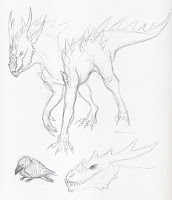 Morb, who hasn't made an appearance on this blog in months...

A picture of Arrow for Kyle, because he's on holiday and MISSED. :C

And ride idea that I thought I'd jot down before I forget it forever... 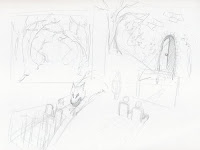 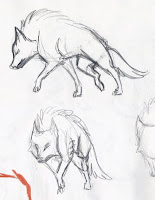 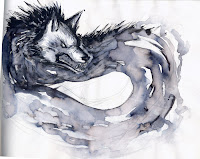 This one is mockup page that David roughed out and that I filled in... It looks pretty good, some things I really don't like about it though - namely the textures don't look half as nice as they were in other experiments. But still, getting there!

Still waiting for some textures to bloody dry.
at 11:27 2 comments:

A couple more dino skull screen prints on t-shirts. These two are commissions.

My interpretation how pages 4-5 should be. I think the wolf should extend to become the background of page 5. Possibly doesn't even need anything else on page 5, but I've put a panel in for an example. Since page 4 has a sequence showing the wolf's growth, having a wolf which takes up 3/4 of the double page spread seems logical to me.

Some experiment examples to give a bit more weight to my poor thumbnails above. 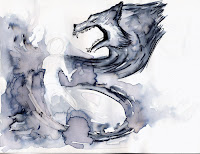